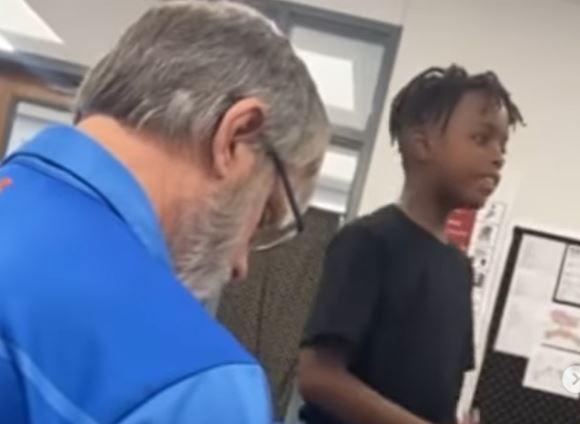 Video of an Austin-area middle school teacher is making the rounds on social media after students filmed him sharing his overtly racist worldview with them in class last week. The teacher, an unidentified white male, made the comments during a discussion about race at Bohls Middle School in Pflugerville ISD, located just north of Austin.

The footage shows the teacher speaking to a mostly non-white group of students about his personal convictions on race and was captured by one of the students in the room.

“Deep down in my heart I’m ethnocentric, which means I think my race is the superior one,” the teacher said during the discussion, prompting shocked laughter from the kids.

The teacher did not attempt to walk his statement back and instead doubled down, telling the students he thinks that “everybody thinks that, and they’re just not honest about it.”

One of the students continued to push the teacher, asking him, “So you said you are what? You are racist? You’re a racist?”

“I think everybody’s a racist at that level,” the teacher replied. When the student presses him again, asking, “But you said you are a racist?” The teacher responded, “I did. I did.”

Among the students in the room was the son of hip-hop producer Southside. The producer, who works with the likes of Travis Scott, Future and a number of other rap superstars, shared multiple clips from the video with his 1.5 million Instagram followers.

“This hurts my heart to see this I’m so angry I’m loss for words but I will stand up for my child and the other black and Spanish kings and queens in this video,” Southside captioned the video post, which has pulled in 290,000-plus likes and counting since Saturday.

The video was also shared widely on Twitter, with users calling for the teacher’s immediate dismissal. KVUE reported Monday morning that the teacher “has now been let go.”

Video of the Pflugerville teacher surfaced amid ongoing clashes over how the history of race in America should be taught in Texas schools. Conservative interests have fought to restrict how teachers present America’s history of structural racism to students, claiming that such efforts are thinly veiled attempts at indoctrinating kids with “critical race theory.”

By Saad SEODecember 19, 2022NewsLeave a Comment on VIDEO: Texas teacher fired after telling students his race is ‘superior’