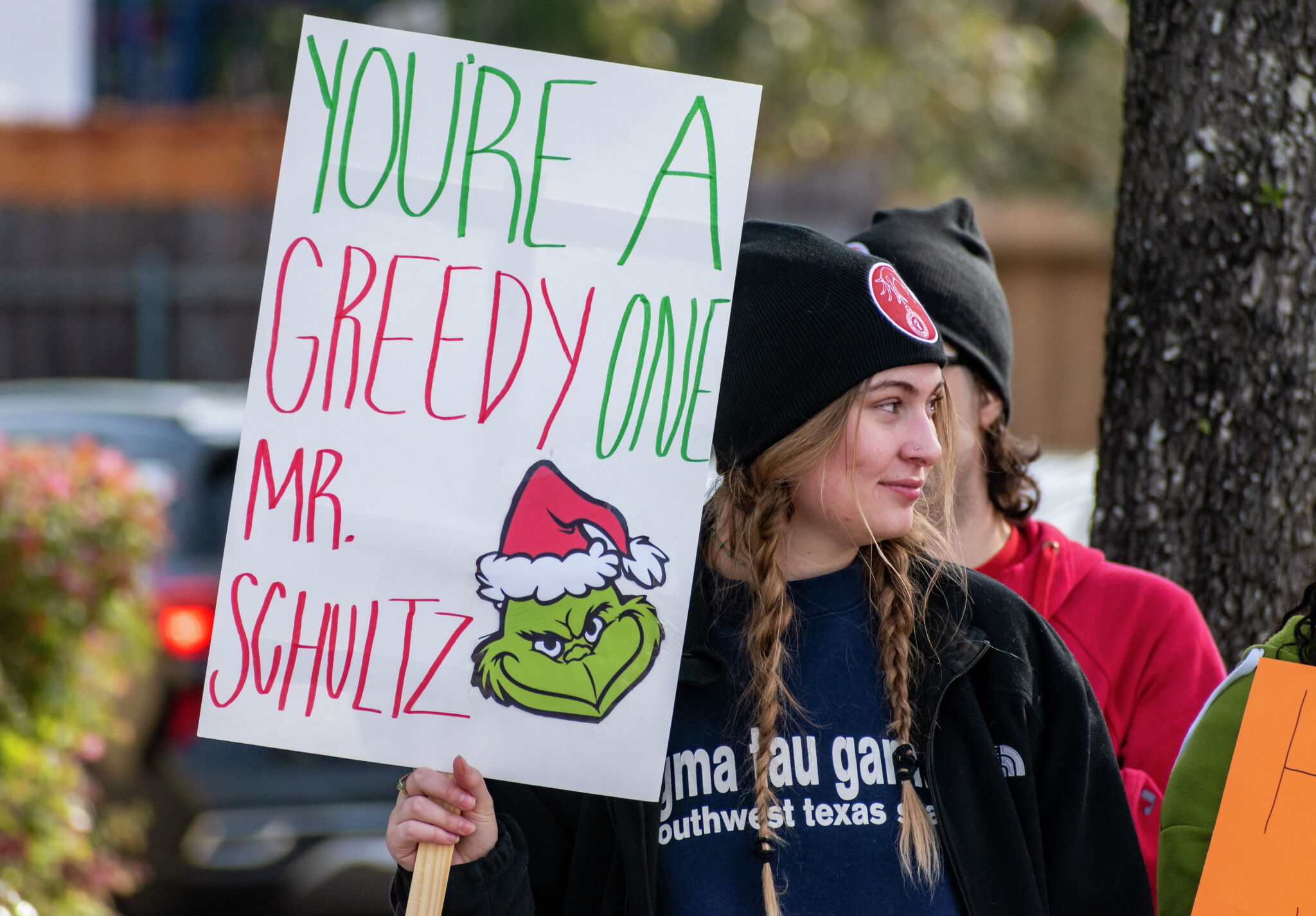 Dressed festively and hoisting up signs featuring the Grinch, Starbucks workers at Houston’s first unionized location went on their second strike Thursday, joining employees at more than 100 stores walking out on one of the chain’s biggest sales days of the year. The protest, dubbed the “Red Cup Rebellion,” coincides with the coffee chain’s annual Red Cup Day, when the company hands out reusable red cups with the Starbucks logo to customers who order a holiday drink. Strikers are handing out their own red cups that feature the Grinch’s hand holding an ornament with union logos.

With 112 locations across 25 states taking part in the strike, the national walkout is the largest collective action Starbucks Workers United has taken so far in its organizing push over the past year. Two other Texas Starbucks locations in San Antonio and Austin are also participating in the strike. Workers at the coffee giant’s Shepherd and Harold Starbucks in the Montrose area, which voted to unionize in September, are calling attention to the Seattle coffee giant’s alleged failure to bargain in good faith and needlessly delayed talks on labor contracts. “We’re fighting to secure a contract they outright denied to bargain with our region specifically,” said Madeline Gierkey, a barista who has worked at the store located at 2801 S. Shepherd Drive for nearly two years. “Then they walked out of bargaining sessions across the country over the last month.” 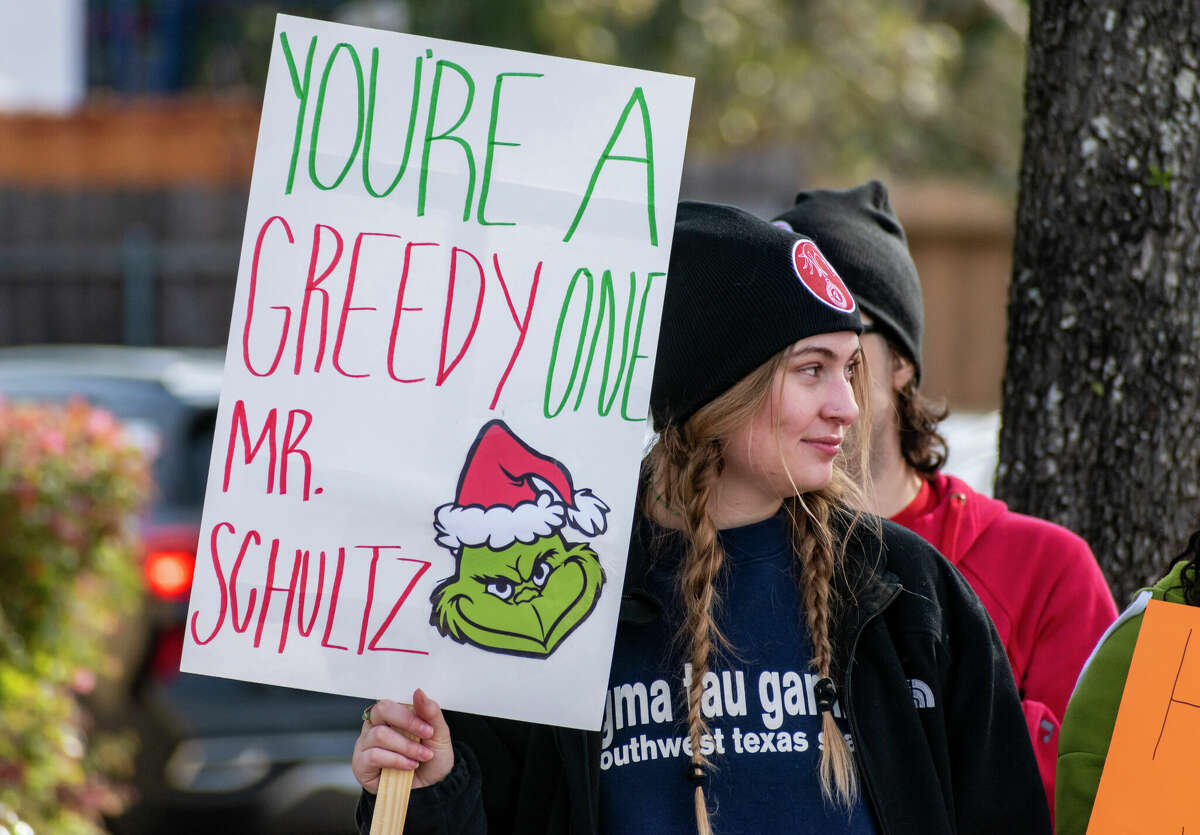 A sign at a strike at Montrose area Starbucks in Houston has a message for CEO Howard Schultz.

Gierkey and her coworkers are also focusing on non-economic proposals, including requesting the company provide employees with non-slip shoes once every six months. “A lot of accidents can happen and sometimes it’s a pain to find non-slip shoes that also last,” she said. “And then of course, whenever it comes to COVID pay, they took that benefit away without negotiating with us. We would like to have that considering there’s still COVID cases going on and we don’t want people to miss work because they’re sick and not receive pay.” 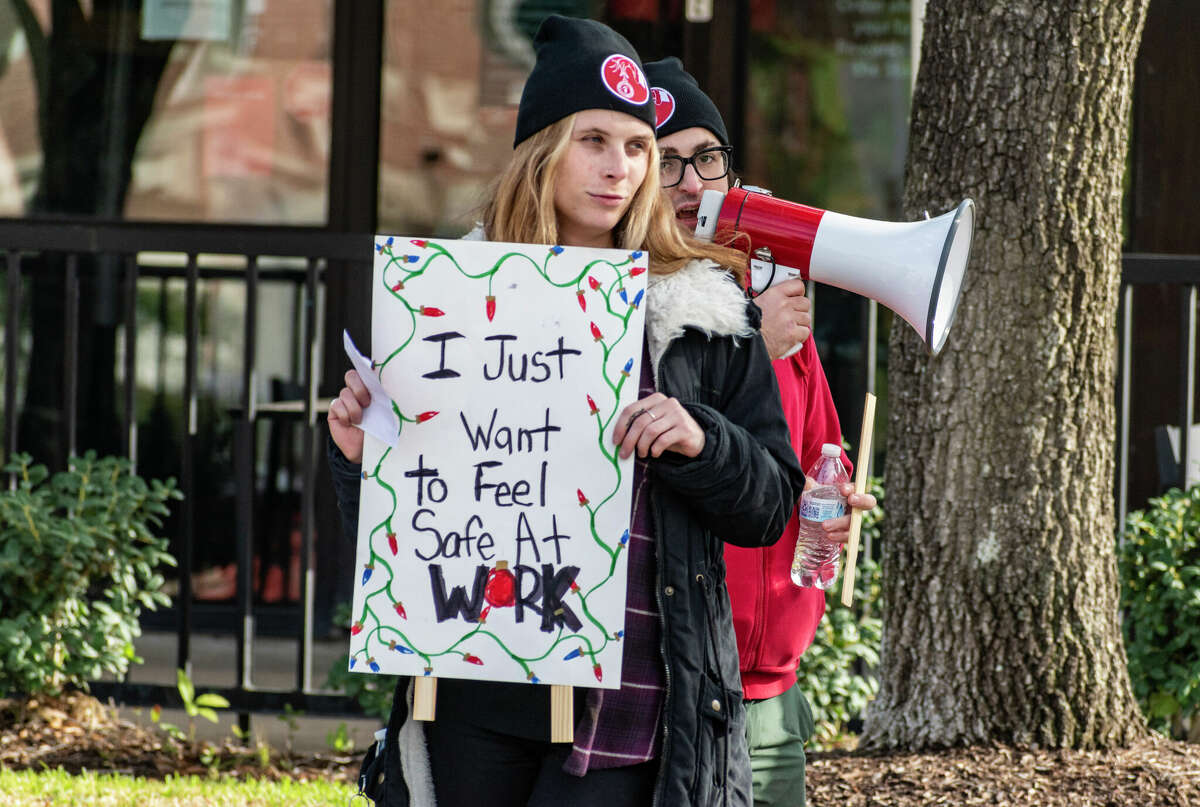 Starbucks workers at a Monstrose area location demanded safety concerns be addressed during a strike Thursday.

At the strike, workers were joined by supporters, including members of the Houston Democratic Socialists of America and the Texas Gulf Coast Area Labor Federation, in discouraging customers arriving from visiting the location. As cars pulled into the drive-thru to pick up mobile orders, strikers handed them pamphlets with instructions on how to demand a refund from Starbucks. Inside the store, managers from other locations were brought in to keep the business running. Gierkey alleged one of her co-workers who was still inside was told by management that their benefits would be withheld if they joined union efforts.

Among the protesters was Josh Deleon, a former employee of the Shepherd and Harold location who claims he was fired by management for leading unionizing efforts at the store. He explained that workers at the store are also protesting against issues with safety, noting a man who frequents the location and has threatened violence against him and other workers, even on the morning of the strike. While workers have called the police, the company has not intervened in any meaningful way, Deleon said, adding that those who noted the man’s conduct were asked to file an incident report with the police and others who said they were uncomfortable were simply sent home for the day. “One person lost like 15 hours one week because of this and they don’t get paid for that,” Deleon said, adding union organizers are seeking cameras be installed in the parking lot and permission to carry pepper spray for protection. 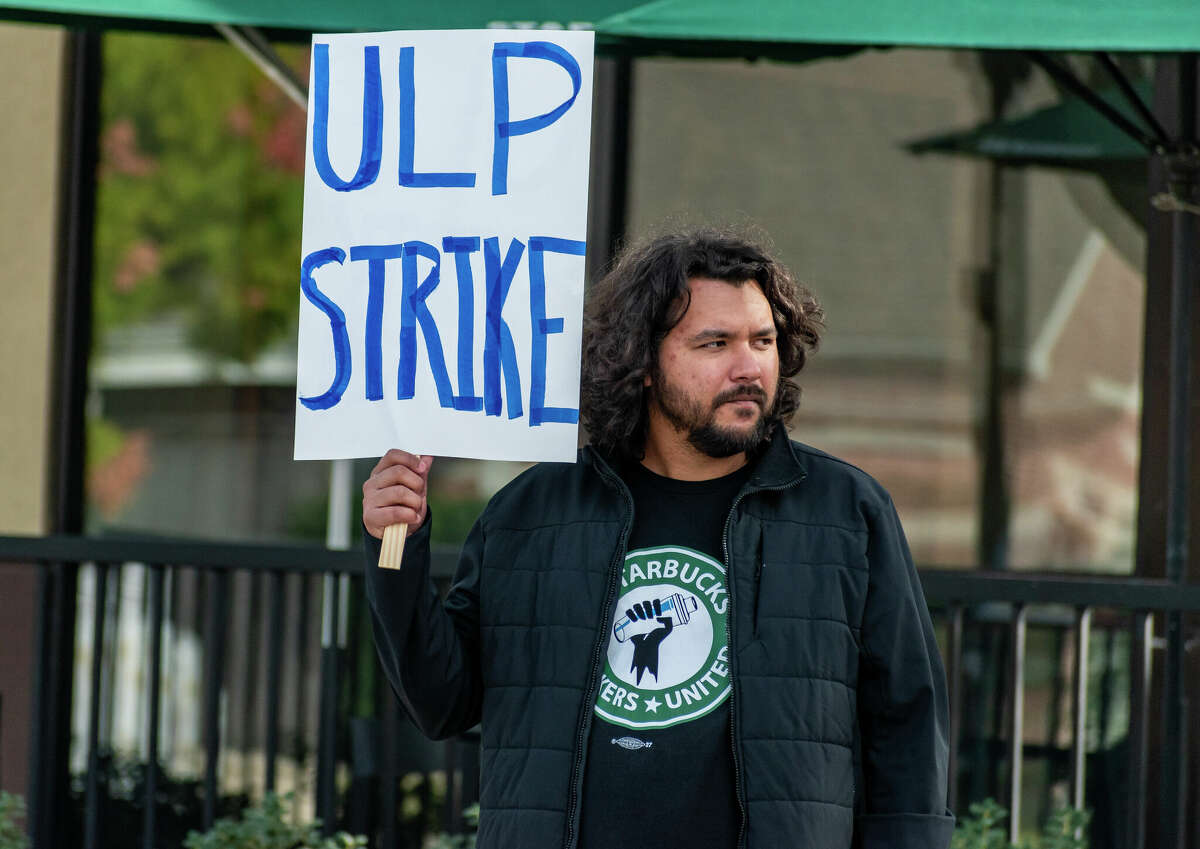 Josh Deleon, who was fired from the Starbucks location allegedly for his union organizing, joined protesters on Thursday.

As far as his job at the store is concerned, Deleon said the company has not negotiated a contract with him. An agent with the National Labor Relations Board is currently handling his case and Deleon says they have found evidence that he was indeed a targeted individual for his union organizing. Deleon was fired just a few days before the store held its union election in September. “I think they were under the impression that there wasn’t as much unanimous support as there was so they probably thought they could get away with firing me and we would lose the election,” he said. “That was definitely a mistake on their part and definitely drew more attention to it.”

In October, the Montrose area store went on an unfair labor practice strike demanding Deleon’s reinstatement. He is still fighting to get his job back but is on the hunt for a new one in the meantime. Describing his current situation and how it’s affected him, Deleon said: “I had to figure out what I was going to do for health insurance. My school tuition was no longer being paid for so after the semester I am no longer enrolled in school.” 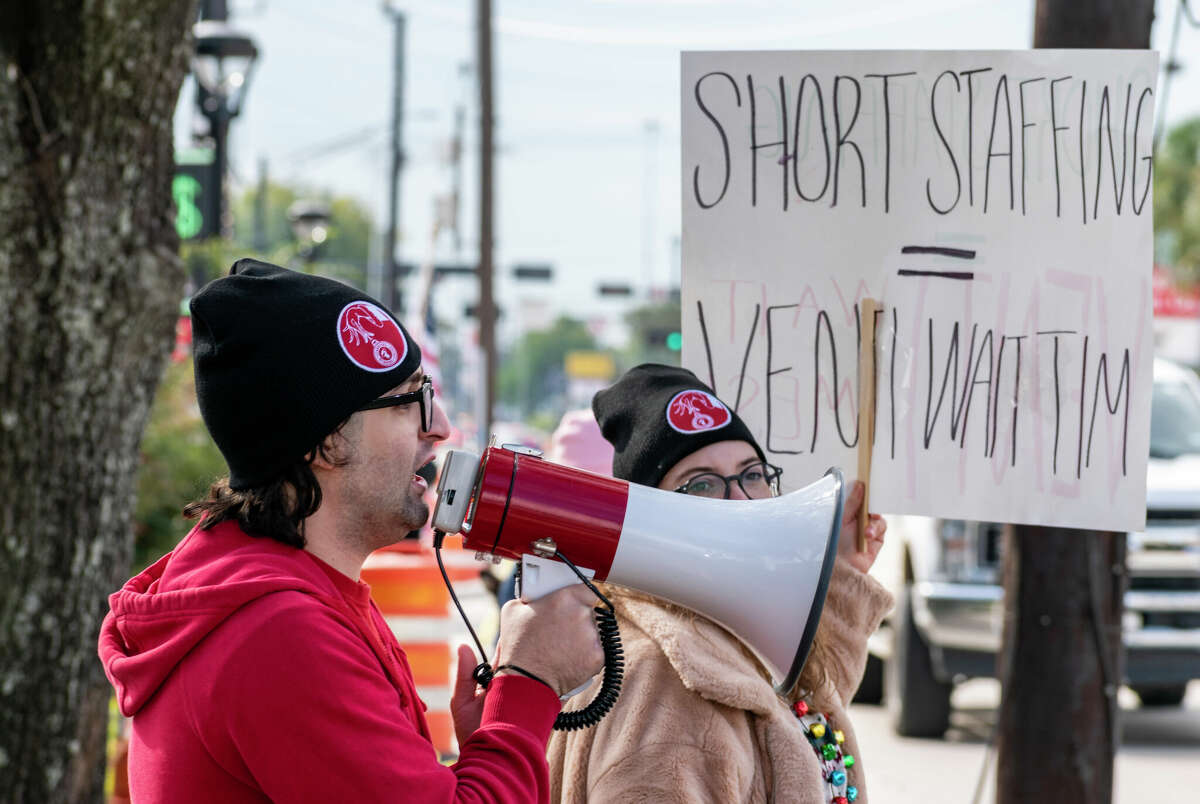 Protesters directed customers to avoid a Starbucks location in the Montrose area during the store’s strike on Thursday.

Deleon is also supporting his girlfriend who works at another Houston Starbucks location within the medical center that recently filed a petition with the NLRB to unionize. Over 250 Starbucks stores across the country have voted to unionize, including 10 in Texas, according to union election data. In an emailed statement, a Starbucks spokesperson said that it was aware of the union demonstrations and respects their partners’ right to participate. “We remain committed to all partners and will continue to work together, side-by-side, to make Starbucks a company that works for everyone,” the statement read. “In those stores where partners have elected union-representation, we have been willing and continue to urge the union to meet us at the bargaining table to move the process forward in good faith.” 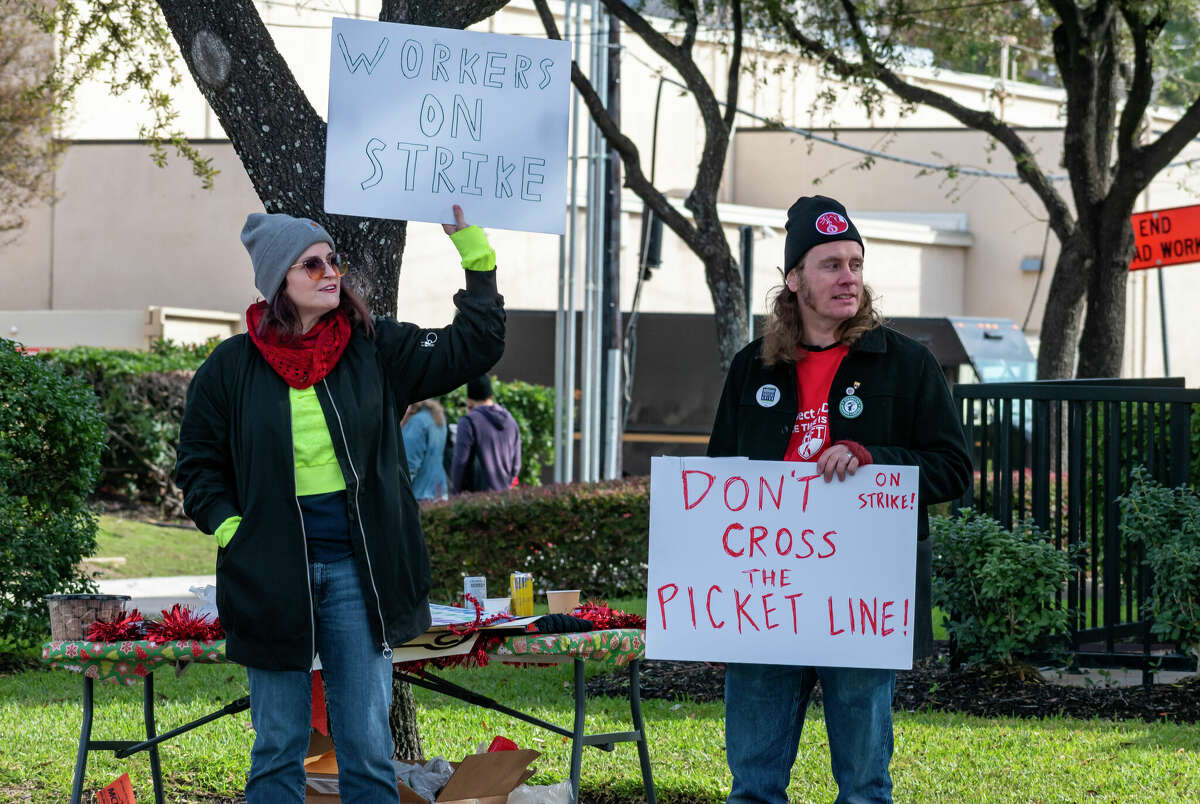 Workers at a Starbucks in the Montrose area were joined by supporters during a strike Thursday.

By Saad SEODecember 10, 2022NewsLeave a Comment on Houston Starbucks employees use Red Cup Day to go on strike